When good news is bad 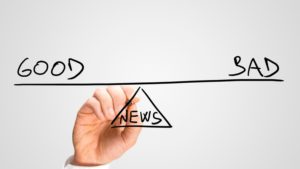 A perceptive client just asked, How is it that a positive jobs report came out last week and the Market proceeded to drop? Great question, I replied.

This phenomenon occurs regularly. It is difficult to understand unless one looks at the effects of the news for the intermediate term, months ahead rather than in a shorter time period. In respect to this precise question, the fact is that the economy is still proceeding to steam ahead, even though more slowly than in recent months.

What is the effect of this labor news? The Federal Reserve Board is likely to continue to raise rates until it ensures that demand for goods and services actually falls. It is our fault as the consuming public that we are wanting to spend too much on goods and services right now!

Reading behind the headlines, the Fed is saying it is committed to curbing the level of inflation (which it greatly desired for the past 11 years) even if it makes the nation economically sick in the process. That is bad news in the eyes of Mr. Market.

This is the same Federal Reserve Board that tries its best to assure us their Ph.D. economists with mountains of data and fantastic computer models are smart, wise and well able to cause our gargantuan economy to obey its every wish and command. This is a pipe dream, always has been and always will be, for tinkerers that have much too high an opinion of their wisdom and power.

As I have said numerous times since 2009, if the Fed would have allowed interest rates to rise to their free-market-led equilibrium as soon as the initial monetary crisis was resolved in early 2009 by the cancelation of the Mark to Market rule, we would have seen a much faster healing from the liquidity disaster, faster GDP growth in the past decade, and CD’s available for the saving public at rates of 3-5 percent in the early 2010’s. It would not be in this current box it built for itself.

Instead of choking the economy by now punishing folks who would still like to build a new house and businesses that finally could use borrowed money at reasonable rates to expand capacity, we face the probability that the Fed will cause a deeper recession, not a shallow one.

Is there good news in here somewhere? Yes. You can now lend some money to the Federal Government until December 31 at an annual rate of 3.9 percent, or until March 31 at a over 4.2 percent or next November 30 at 4.7 percent. If you are somewhat optimistic about inflation slowing in the next year or two, you can also get CD’s in the mid-4 percent range for 2 to 3 years.

Milton and Rose Friedman, the eminent economist couple of Chicago and world fame, always argued that inflation is at all times a monetary issue. The issuance of billions and trillions of dollars created out of thin air in the past several years has caused this current rise in prices. Too many dollars available chasing too few goods and services. Take the excess dollars out of the system (or better yet, do not ever put them into the system), and inflation will be tamed.

We are favoring the shorter-term certainty of lending money for short periods to the government for its own extravagant needs until Mr. Market can see the intermediate effects of the Fed’s lack of wisdom.

(Rates mentioned are found in the offerings of TD Ameritrade Institutional as of Tuesday morning, December 6, 2022, and fluctuate rapidly up or down.)